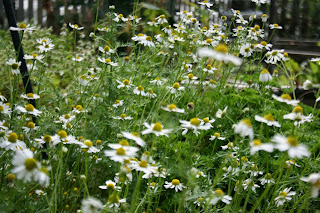 In my herb garden this summer I decided to try growing German Chamomile. I have found that is is extremely easy to grow. I started it from seed in the spring.  It sprouted quickly but was slow to mature.
The flowers start to appear at the end of July and continue until a frost! The fine fern leaves and small flowers look delicate but this is a suprisingly tough plant. Chamomile has had reported use for many centuries by people who felt sick or stressed. The Greeks called the plant ground apple due to the distinct aroma of
mildly sweet apple. It is considered the most widely consumed herbal tea in the world. 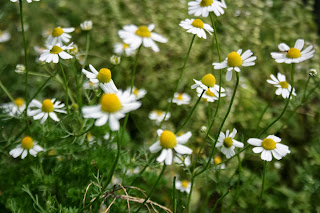 Recent research in England has found evidence that Chamomile actually helps relieve a wide range of health aliments from the compounds glycine, and hippurate.
Glycine promotes sleep by soothing the nervous system and also calms muscle spasms.
It is a stomach soother for the same reason of muscle relaxation in the intestines.
The hippurate provides the antiseptic, anti inflammatory, and antihistamine qualities.

Tea is made by brewing in a pot with a lid to hold in as much steam as possible. Brewing time for the best benefits is 10 minutes. 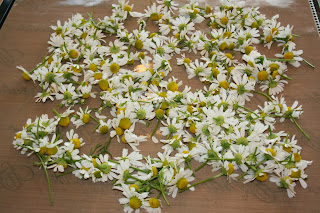 Here is my chamomile ready for drying.
As the weather cools enjoy this mild flavored tea for a relaxing healthy drink!
Posted by NUTRITIOUS NEWS at 11:40 AM