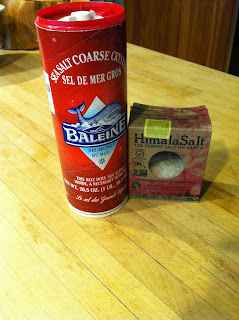 Current dietary guidelines in the United States recommend limiting salt intake to any where from 1.5 to 2.4 grams a day. One teaspoon of table salt contains about 2.3 grams of sodium.
Several  other factors however are as  important if not more important in the consumption of salt.

The first is that not all salts are created equally.
-Natural, unprocessed salt such as sea salt or Himalayan salt, contain about 84 percent sodium chloride (just under 37 percent of which is pure sodium) and the remaining 16 percent are naturally occurring trace minerals, including silicon, phosphorus, and vanadium.
-Processed (table) salt contains 97.5 percent sodium chloride (39 percent sodium) The rest is man made chemicals, such as moisture absorbents, and flow agents, such as ferrocyanide and aluminosilicate. Also the processing of the table salt involves drying the salt above 1200 degrees fahrenheit radically and detrimentally altering the chemical structure of the salt.

The second important consideration is that sodium needs potassium to balance it in the body. If our salt to potassium ration is off that is when problems arise.
One study found that while higher sodium levels correlate with an increased risk for high blood pressure, potassium helps offset sodium's adverse effects. It is also known that too little sodium can cause imbalances so moderation is key and having a diet with lots of potassium for balance.

So the answer?
- You need salt but make sure it is the right kind, and in moderation
- Avoid a diet of processed foods. They are high in processed salts and low in potassium.
- Eat a diet of whole unprocessed foods, ideally locally grown to insure optimal nutrient content.
Some Vegetables high in potassium are Lima beans (955 mg/cup), Winter squash (896 mg/cup), Cooked spinach (839 mg/cup).
- When using added salt, use Himalayan salt, as it contains lower sodium and higher potassium levels than other salts.
Posted by NUTRITIOUS NEWS at 1:32 PM